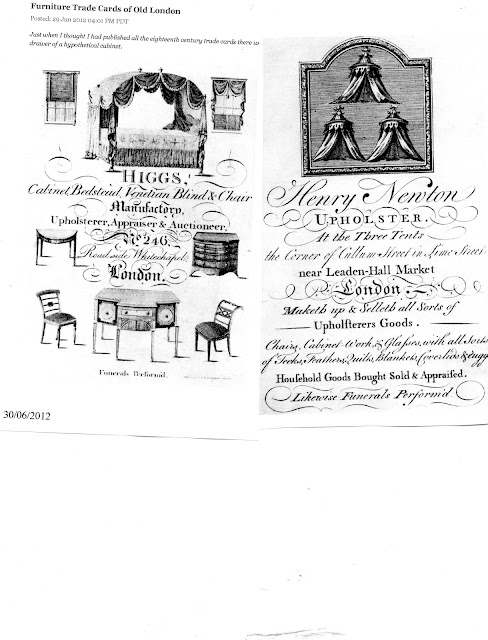 This re-print is from Spitalfields Life Website, a fascinating daily record of Old London, its shops and artisans that is is my daily dip of nostalgia and I admire the big collection of 18C trade cards that have recently been shown.  I would like to have something as decorative myself but would not be able to provide quite all the services offered; everything supplied from blinds, 'coverlids' and  'ruggs' to funerals, and I rather fancy the three ornamental tents which would come in handy for our next outdoor textile event.  I do recommend a glance at the stunning old black and white photos of pre-war London's East End and its characters - mostly now swept away by bombs or slum clearance but still within living memory of some of the splendid Cockney characters illustrated.   Spitalfields antique Market, Thursdays, has become a very trendy new Vintage antique event, good for Brocante, vintage and workwear clothing plus decorative French stuff on the stall of my good friend Sue Stokes who has a good nose for the latest 'must have' and buys from Paris markets.  You will not be disappointed.
Posted by elizabeth baer at 17:46 1 comment:

COME TO THE FAIR! 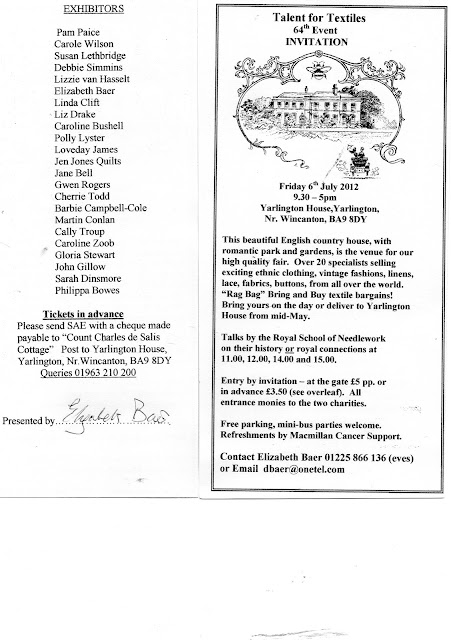 SACKCLOTH WITHOUT THE ASHES 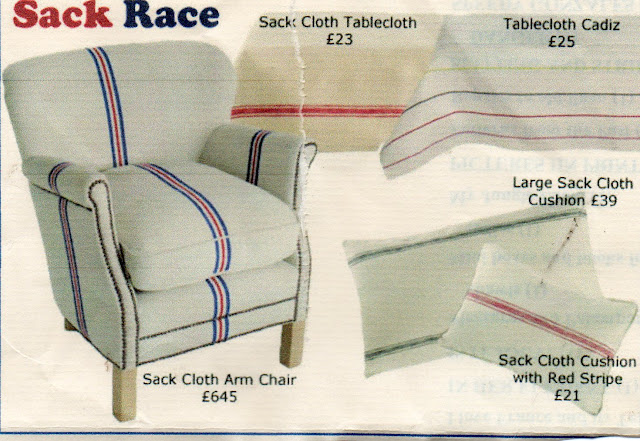 For a fresh new look in your living room - sackcloth is hard-wearing and washable and the basic cost of the material is not too high - you can find sacks at about £45 each and two will do a small chair - 3 needed for something with big arms and even more if you want cushions!    I sell a great many myself (these are Hungarian from another supplier but illustrate a few uses for them; my chairs are a bit cheaper and I use the rather superior Ukrainian sackcloth)  I would not recommend using it for an armchair that is in daily use - some of  the Hungarian sacks are a bit too loosely woven and will sag and stretch, and the very light colour will soon show grubby arms and backs, unless you are very careful or use arm caps and head rest covers.  You can freshen them up with a sponge dipped in warm water with a bit of oxygen powder like Vanish  or with diluted  ammonia, but this is only partly satisfactory.  The really good thing about this stuff is that it is thick and heavy for good wearing qualities and the blonde shades and muted coloured stripes go very well with antique furnishings as well as contemporary schemes and the so called mid-century modern look, (which is nothing more exciting than 50s and 60s stuff!).  The Ukrainian sackcloth which is usually hemp rather than linen, is ideal for occasional soft furnishing, upholstered dining chairs and drop-in seats, stools, and plenty of firm, sober cushions where the attraction is the nubbly texture, the light porage shade of the main part, and the soft, natural dyes of the stripes.  I find the bright reds and blues of the Hungarian sacks a bit loud and they do not blend so well with old fabrics and polished furniture!
Posted by elizabeth baer at 11:47 4 comments:

Labels: A FIRESIDE CHAIR BY ANOTHER HAND

During the years I was dealing in folk art objects for a picture gallery selling naive paintings in the West End, I was often asked for English smocks to go with the beautiful shepherds' crooks that I  found - usually at Ardingly Fair in Sussex, but also several in Lincolnshire - typically each had a different curl to catch the legs of the lambs and sheep, so quite a lot of collectors were interested in them and even I got to know some of the shapes.
The rarest were the goose crooks, very long and with a very small crook to catch their slim legs, used for driving the geese to market from Lincolnshire to London - a very long walk for the poor birds on the rough roads.  At the beginning of their long journey, the geese were driven across some tar which stuck to their feet and then over some sand, so they had little 'shoes' to protect their feet and arrive live in London markets.
Just at the moment there is a huge interest in artisan work costume, workrooms, sheds, tools and the older traditional work -wear of the English countryside - smocks!  I will feature my latest model in a  BLOG when I have taken its portrait.
Posted by elizabeth baer at 20:54 2 comments: