I have made a new pair of curtains out of some rather battered old ones, French
Indiennes late 19th C. The linings were shot so I used some rather dashing old red linings of the period, and made the curtains up in French style - they often layered the three fabrics, top patterned, interlining and lining on top of each other. trimmed all the edges and sewed them together with the edges raw. Then they used a special braid which had two rows of pattern, this was folded down the centre longways and it was sewn by hand down the front and back of the curtain edge. It seems to work very well, and helps to preserve the edges which often get damaged by sun, hands pulling and the metal tie-backs
The charming design includes red roses and foliage and garden tools, a flail, spade and baskets of fruit in trophies well spaced across the fabric. There were endless versions of these themes which had already been used the century before in the Toile de Jouy designs, showing romantic scenes of lovers, cherubs and peasants dancing, all with flowers, fruit and romantic buildings incorporated in the overall design. These Indiennes were highly popular because the Empress Eugenie was known to use them for her own clothes and for furnishing the Royal palaces and the French printers produced masses of these pastoral and floral patterns

Posted by elizabeth baer at 22:48 No comments:

Labels: ROMANCE IN THE GARDEN 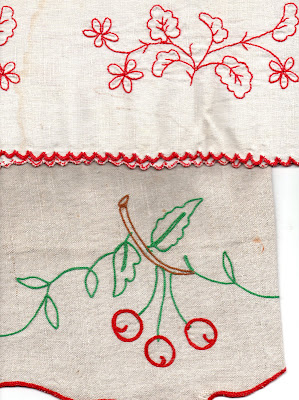 This blue coffee pot is part of a machine embroidered border made in France quite recently to decorate kitchen shelving, pelmets and mantlepieces. These were very popular in the twenties and thirties and the picture on the right is typical of the borders worked by house-proud housewives. I think the patterns must have come in ladies' home or needlework magazines because there are a great many of them still about, some rather crude and comic, showing chefs chasing geese and cockerels, and others more artistic with bunches of cherries and fruit, coffee mills, spoons and other kitchenalia. They often had buttonhole edged scalloped borders and often come in quite long lengths. Applied to nursery and kitchen curtains they can be quite attractive.
Many kitchens in France in the big old houses faced North or had very little natural light, and were furnished with dark brown oak or chestnut furniture, so the housewives must have felt the need for something gay and colourful while they slaved away in a gloomy place.
Posted by elizabeth baer at 18:12 2 comments: