The thrill of the chase! 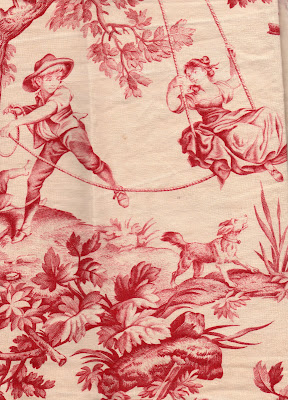 At the recent Montpelier Fair, I passed a big furniture stand and a cardboard box, suitcase size. Seeing a bit of pink print, I dug in and found a hoard of remnants of my favourite Indienne prints, all pinky red. A burly trader said there was another box if I was interested - was I???
With beating heart and shaky hands I counted over 200 smallish pieces, ideal for cushions, and some much bigger panels, enough for several pairs of bedroom curtains. Some were as new, bright and unused, others had tack holes round the edges and some were very faded - a very motley lot
The dealer then volunteered that they were all toile de Jouy (which they were not) and they had all come from the greniers (attics) of the Chateau de la Brede, the seat of the Baron Montesquieu near Bordeaux. By strange coincidence I had read that week in my copy of Aladin, the French trade magazine, that the papers of the original 18c. Baron, a world-famous philosopher, politician and writer, were being removed from the chateau to be put in an official archive. The box holding the fabric was an official one with an archive label 'borrowed ' by the rascally trader! So provenance o.k., but how had they been used? He told me they came from the cupboards and attics and I think that they must have been used to decorate the panelling in three or four rooms and the cut-offs had also been saved by a thrifty housekeeper. There is quite a lot of genuine Jouy toile, late 18c. and this is a rustic genre design on good quality linen, nice and bright and with lots of useful cameos to make cushion centres, called L'Escarpolette, The Swing, The greater part of this hoard is late 19c. Indiennes, charming and colourful, but not of the same rarity or value. See Tracking Red Indiennes Blog., for more about Indiennes from this lot.
Posted by elizabeth baer at 20:50 No comments:

Labels: Treasure in the attic 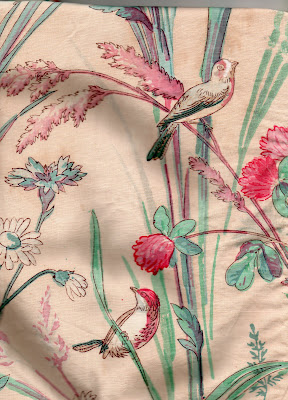 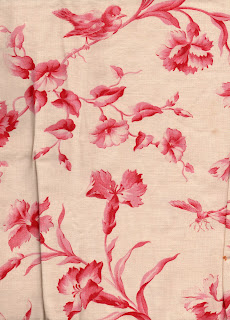 I find the Indiennes, produced in France in the last half of the 19th C. a source of delight - they come in many colours but the pink and red ones showing birds, insects and foliage are my favourites. They became very fashionable in France when the Empress Eugenie was on the throne and she had a passion for 'la nature' particularly as depicted in the Indian prints imported on the East India trading routes. French mills were quick to copy and re-design the gorgeous Eastern flowers, bamboo foliage and some of the birds might well have come out of French gardens, but many were very exotic with extravagant plumage and tails. They were all done in a pleasing naturalistic style and the scenes were often embellished with pretty butterflies, bees and other insects all in flight amongst the foliage. The earlier prints had very small birds and the foliage was often delicate, like bamboo or long grasses, but towards the end of the century they became coarser and the birds became rather fierce-looking raptors with large beaks and claws. They were printed on very fine cotton, and probably glazed so they have often faded in the windows and are rather flimsy - I have used several panels in my own house which I thought too fragile to sell to others and have devised a way of lengthening both the size and their life-span in my own way -the birds are multi-coloured and so are various small flowers. These are in my visitor's cloakroom, so pay them a visit one day!
Posted by elizabeth baer at 20:10 No comments: